An in-depth tour of Nazareth

Nazareth is fortified, surrounded by mountain peaks on all sides. An ancient settlement existed there from the time of the Second Temple, and its remains were discovered in archaeological excavations under the direction of Bellarmine Franciscan Gati before the establishment of the Church of the Annunciation. The remains were incorporated into the compound and in the area of ​the village of Nazareth, which illustrates life at the end of the Second Temple period when there was a Jewish settlement there. The city was famous, of course, as the home town of Jesus. Nazareth has developed over the years as a Christian city in the Byzantine and Crusader period, and many monasteries and churches are networked in its landscape. At the same time Arab Christian and Muslim families have immigrated to Nazareth. Today, the city has 70,000 people, 65% of whom are Muslims.
Today, Nazareth has one of the world’s most diverse concentrations of Christian communities. We will take a comprehensive and thorough trip through a large part of them. In addition, there are several impressive and heritage-rich mosques and fascinating artisans.
Without a doubt, a Nazareth tour is one of the most important Tours in the north of Israel, and is highly recommended for every visit to northern Israel. 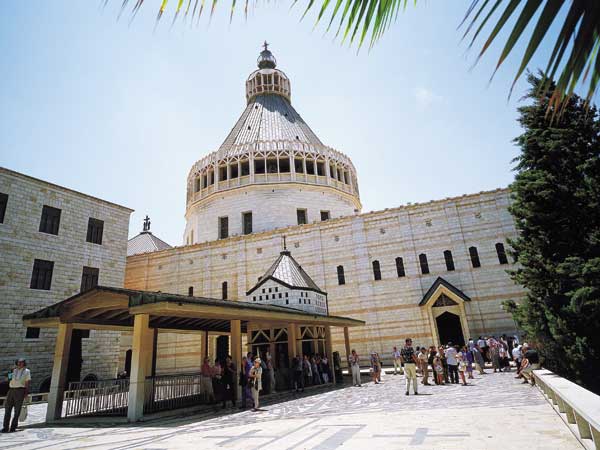 Church of the Annunciation

Inside the Church of the Annunciation

It is recommended to start the Nazareth tour in the morning with the impressive view from the top of the Mount of the Precipice: wonderful vista of the Israel Valley, Mount Tabor, the Gilboa, and more. After this, we will start the walking tour of Nazareth, where we will visit the wonderful Salizian church overlooking the city. We will continue down the stairs to the city, through the church of Manshursty – the Franciscan altar. We will continue through the Franciscan compound to the Church of Joseph and from there to the Monastery of the Nazareth Sisters, to the Greek Orthodox Church, where according to tradition Jesus prayed and a church was established during the Crusader period. We will continue on the pilgrimage route and visit the city’s great spice mill. We will enter a local house with rare painted ceilings and end with a visit to Fakhour Musmar – an authentic ceramic factory.
We will be able to eat in the lower city near a site from the gospels.